One of the most exciting builds I ever did! When I first seen this trooper in The Force Unleashed video game, I was floored! I wanted it! Plus, I just love my blue.

Now The Force Unleashed takes place between Episode III and Episode IV. Being there are no “colored” Stormtroopers in EP IV, we are now looking at the evolution of the Clones into the TKs. With that being said, I don’t think EP IV armor should be used. The Clones are stylized and perfectly built. The TKs armor (in EP IV) is very rough. From the “thumb” pits in the biceps and not being perfectly centered on the arms to some helmets missing tube stripes and being hand painted. So in order to really capture that transition from the Clones to the TKs, a more stylized armor kit should be used. Either ATA or FX (if you can find it) would best suit the character. I was very lucky to find a new set of FX armor. For the bucket, I decided to use an eFx ANH Stormtrooper helmet. It’s very stylized and symmetrical, perfect for this build. It did need some modifications, but still perfect for this build none the less.

So here we go…

The FX armor built and painted. 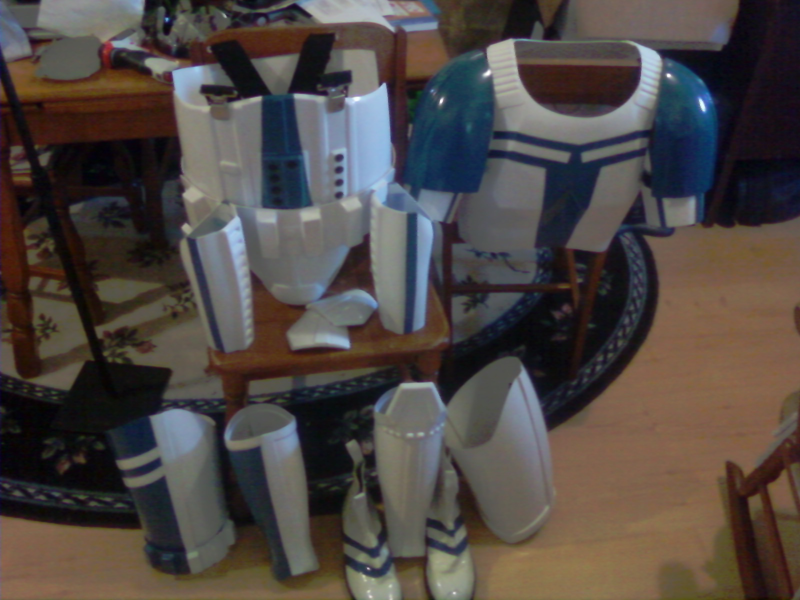 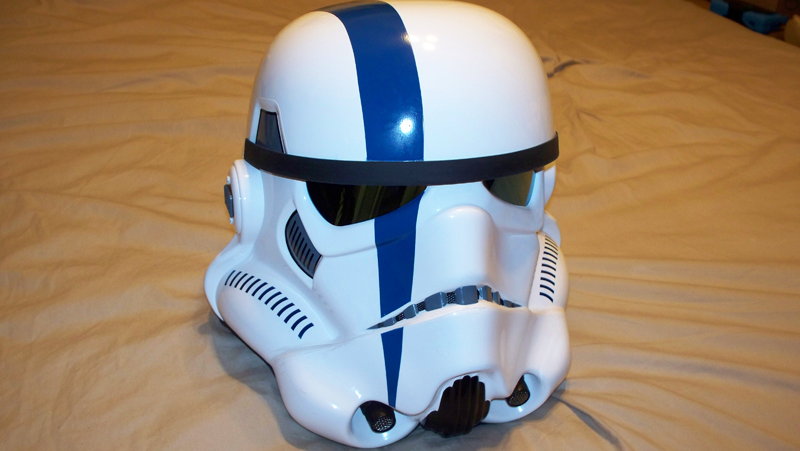 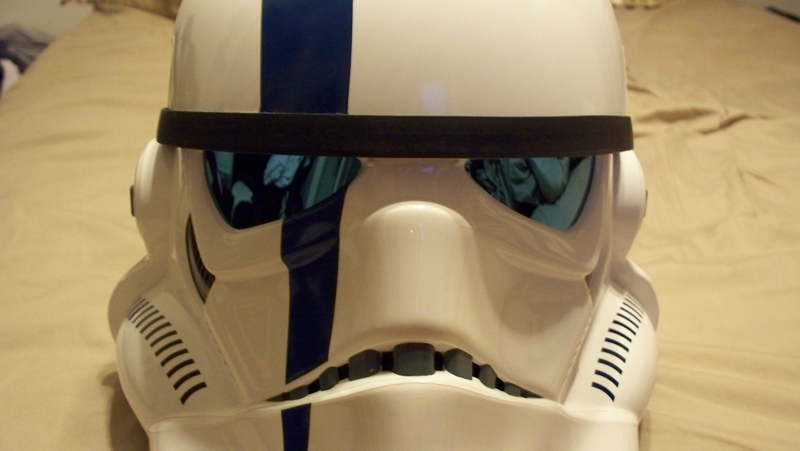 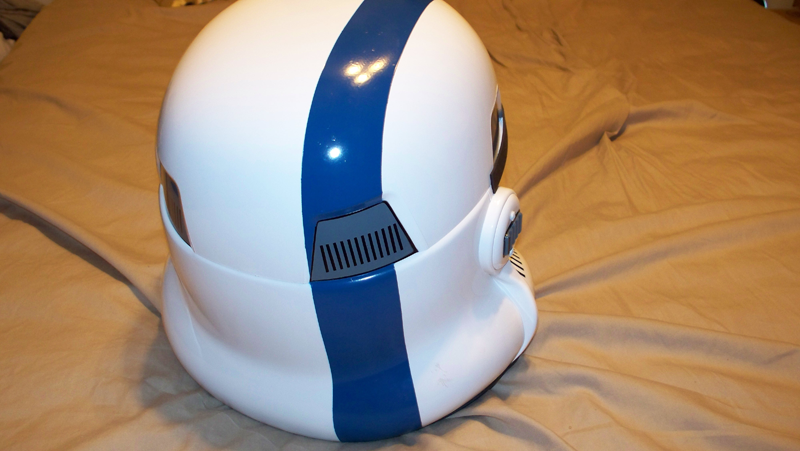 Once again, all my buckets have the same setup. Everything is self-contained in the bucket. A single 9v battery hidden in covering powers the RadioShack® Mini Audio Amplifier (p/n: 277-1008). A Radio Shack Hands-Free Tie-Clip Omnidirectional Electret Mic (p/n: 33-3013) is embedded near the “snout”. Two Radio Shack 8-Ohm Mini Speakers (p/n: 273-092) are embedded behind the mic tips to project the sound from the front of the bucket. A Venom 7.2v 1200mAh 6-Cell NiMH Battery (p/n: VEN-1511) (hidden on the top of the bucket) powers the Delta AFB0505HB 50x50x15mm 14.13CFM fan which pulls air in from the front frown. I also have a Hyperdyne Labs Trooper Voice Amp installed to produce the trooper “click” sound. Although, the version 1 has been discontinued, the new “PRO” version is out. 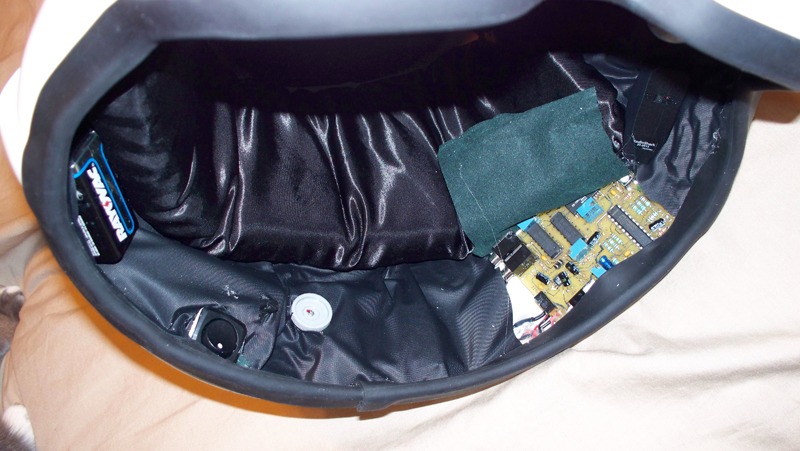 I’m a firm believer in “paint it perfect first…weather it after”. Personally, it gives a more “natural” weathering effect. So, on to getting the armor dirty. 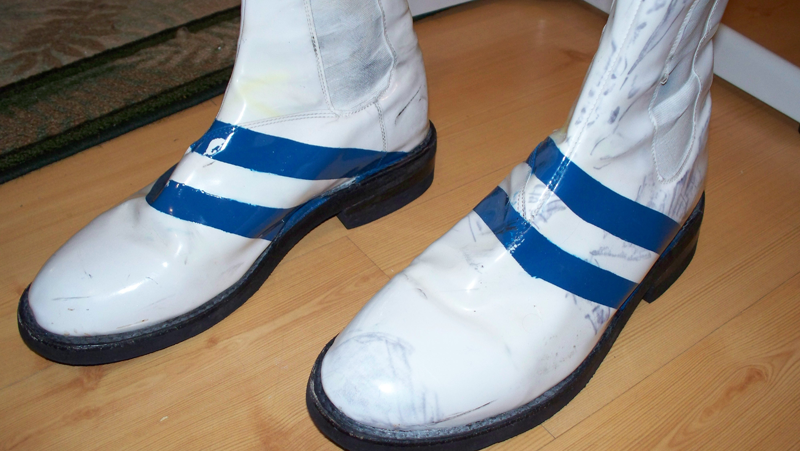 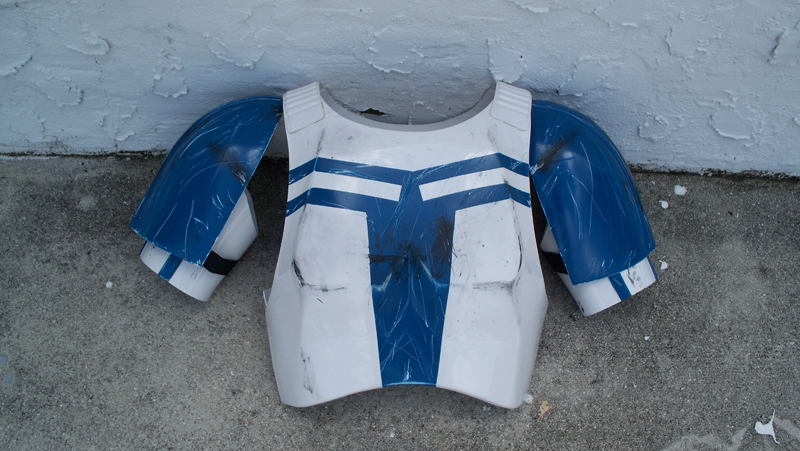 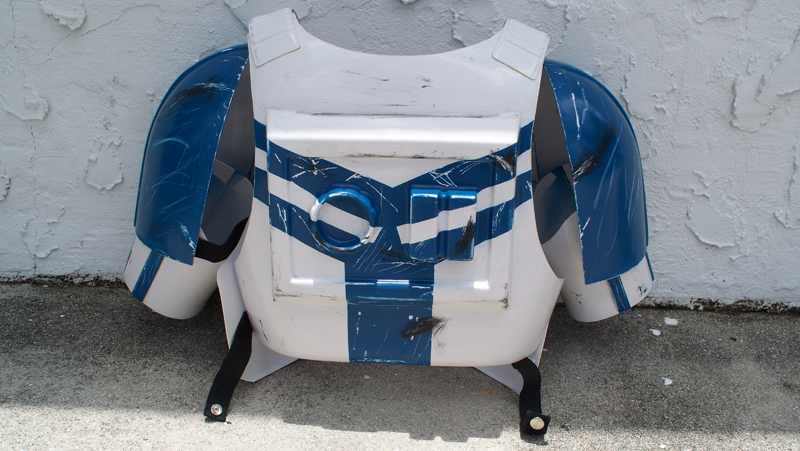 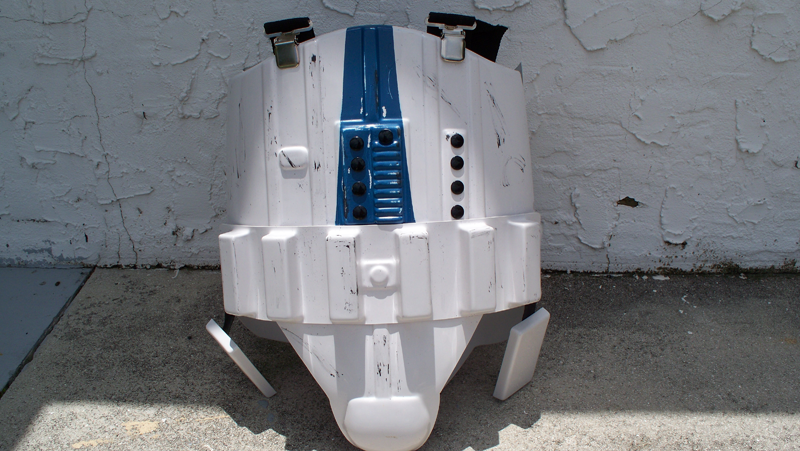 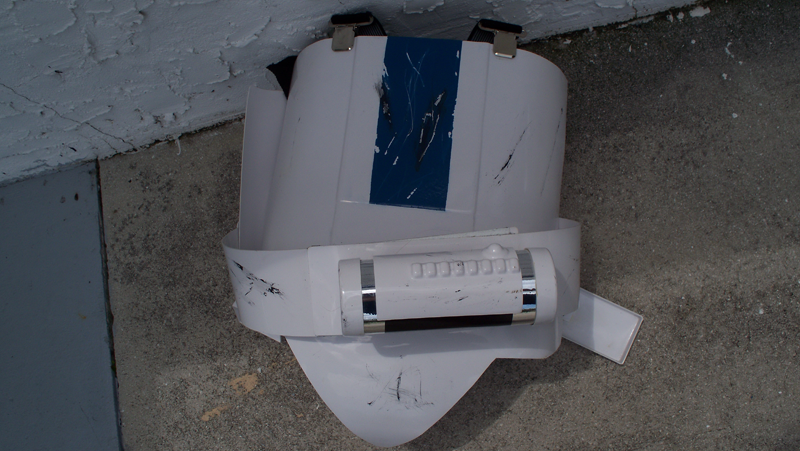 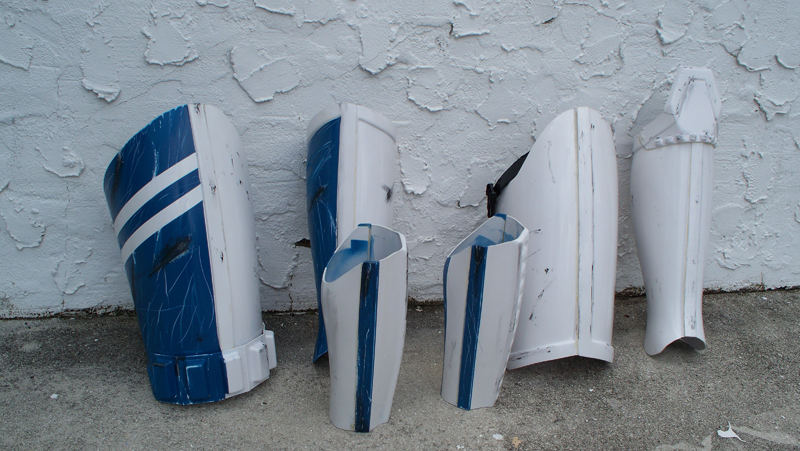 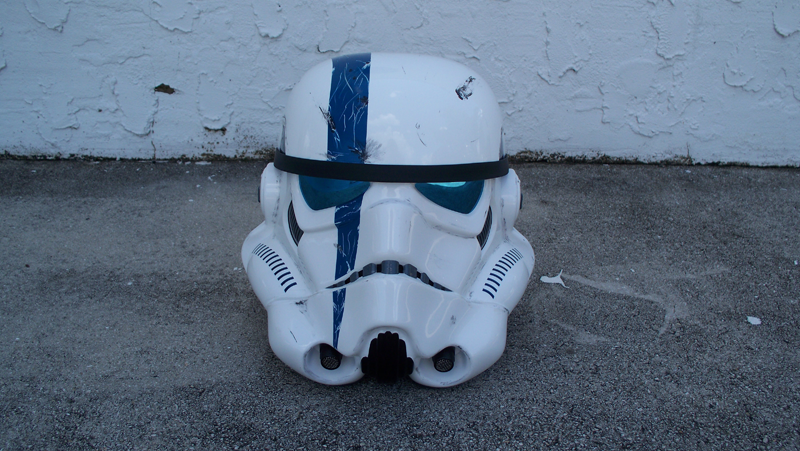 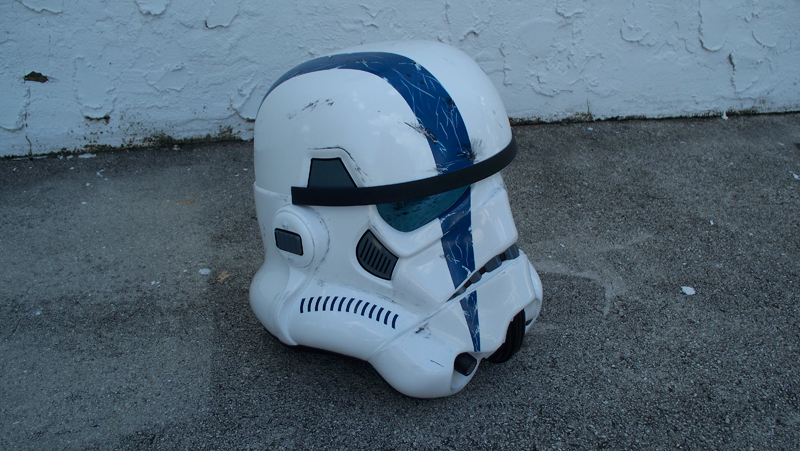 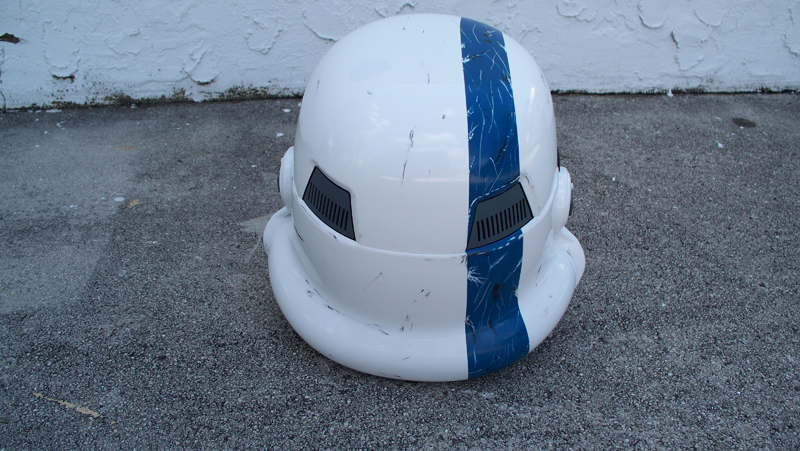 Now for the E-11 Blaster! I have an original Sterling, but it weighs a TON! I also have a Master Replicas E-11, but also VERY heavy. So I got my hands on an Airsoft Sterling. I converted it over to an ANH style blaster. From years ago, I still have my original Hengstler Counter and both M-38 scope and M-19 scope. So I casted the parts and to lighted the weight, made resin copies for this gun. It turned out rather well. For my holster, I don’t go to anyone else than Ashton at NyghtCraft. The best leather maker you will ever know. Truly is talented!! 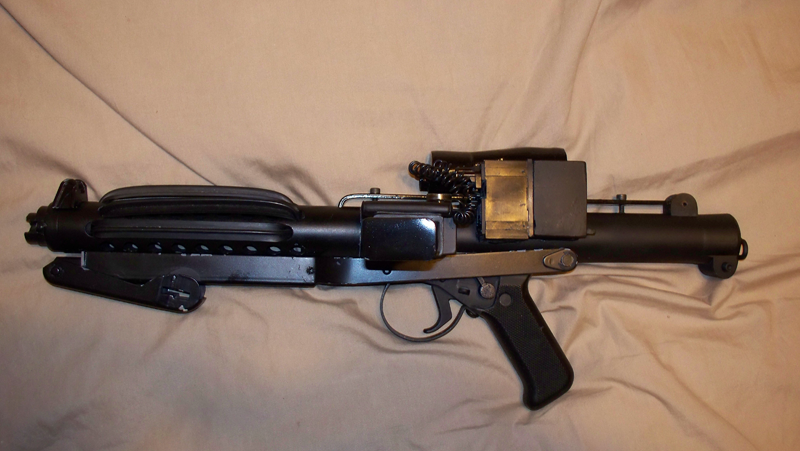 And now, it’s all finished. One of my favorite armor kits I own!