I’ve always loved Mandalorians but never wanted to be that “1000th Boba” or that “1000th Jango”. I always wanted to create my own Mandalorian. From comics, books and the lore itself…there are thousands of Mandalorians and all with a story of their own. Some are in clans and their armor reflects their affiliation with the clan. Others are bounty hunters. And much like Boba Fett, they’ve scavenged, stole and even bought their armor and customized it according to their environment or “way of life”. In turn, very few Mandos look the same. Which is what brought me to the Mandalorian Mercs Costuming Club. Great bunch of troops and all embrace the heart and soul of the Mandalorian lore. Most even have backstories for their creations. Which lead me to, I have to create a weapon for my Mando.

I’m mixing my Mando between Boba and Jango with my own color scheme. So I wanted to make a EE3 inspired rifle…but with more POW! I used the Grievous blaster as a base, but just the main body and grip/trigger. I extended the barrel to EE3 specs. Custom made a stock. Used a sniper (“almost” ASI looking) scope that I got at the local gun show. I just got the main bit of primer on the base, and just waiting for my T-Tracks to come in to cover the barrel.

So I designed the BlasTech EE-7 Power Carbine.

“Custom designed and rare firearm from Merr-Sonn. Merr-Sonn Munitions secretly built this solely for use by Mandolrians only. Catching wind of the possible clone creation on Kamino, Merr-Sonn “borrowed” the DC-15, EE-3, DT-57 & RT-97C and used their own technology to combine the best aspects of the weapons into one easily mobile and effective weapons to add into their arsenal. With the excitement of the EE-3 (prior to construction from BlasTech), the power core was to be encased in the shell of a modified DT-57, but with the technical make-up of the EE-3. With the accuracy of the DC-15 but the attack power of the prototype of the RT-97C, Merr-Sonn did not want to stop there. With their success of the early E-Web and BC7, they knew how to incorporate heavy fire power in a small package. The head of BlasTech caught wind of this “stolen” technology, and paid a visit to Merr-Sonn. Little is known of what occured, but the weapon was kept under the radar and branded under the BlasTech name. Very few were able to obtain this weapon, except for the Cuy’val and Mando Cabure. Very few even knew about it’s exsitance. The EE-7 has a extremely fast recharge rate and is considered to be very deadly … in the wrong hands. The weapon can be set to full-auto and deliver a barrage of blaster fire similar to a heavy repeater, but looses it’s accuracy slightly in auto mode. A fully charged blast will exibit extreme accuracy and can punch a hole in an armored transport with no resistance. Specifically designed for mercenaries that are in need of a rapid delivery of bolts in tight situations but also with the option to unleash a powerful dischage to take down armored personnel and weaponry with precise accuracy. After the construction of this weapon, the original fabricators “disappeared”. It’s rumored that BlasTech destroyed the design and the last remaining weapons shortly after. BlasTech has stated, “No such weapon was ever created.”. After the formation of the Empire, BlasTech continued the construction of their EE-3 and E-11 line and distributed it to the Mandalorian Protectors and Empire respectively. It is said the Empire is still on the hunt to find the EE-7.” 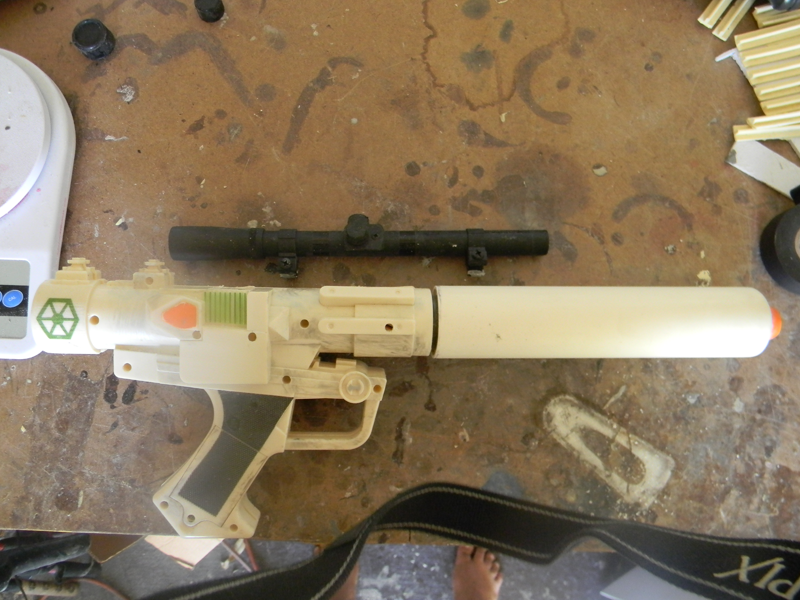 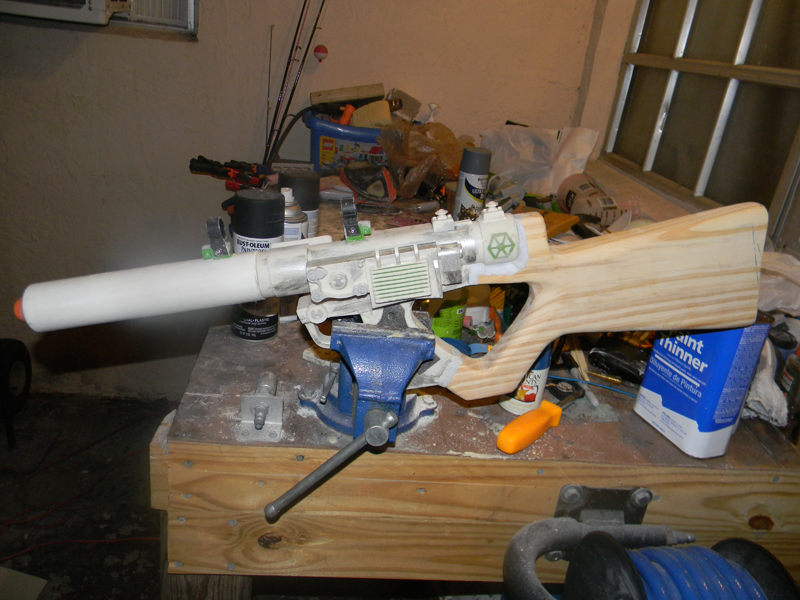 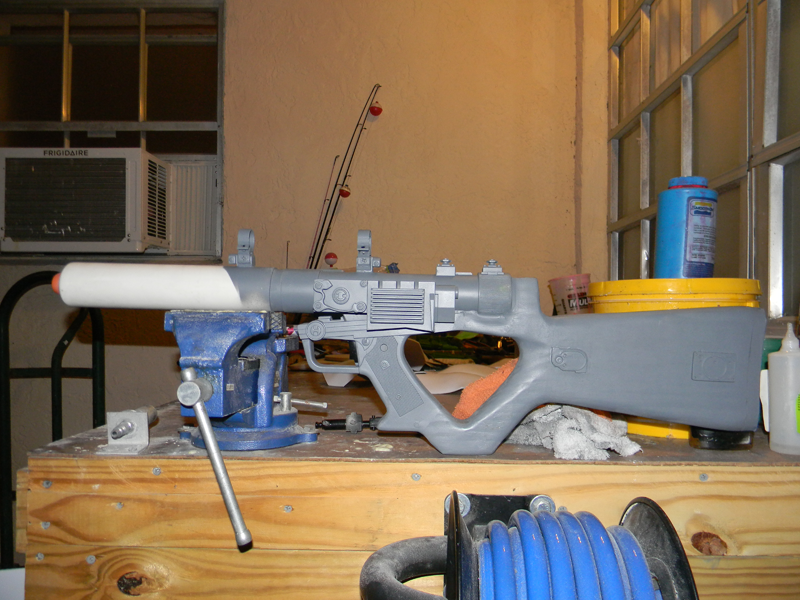 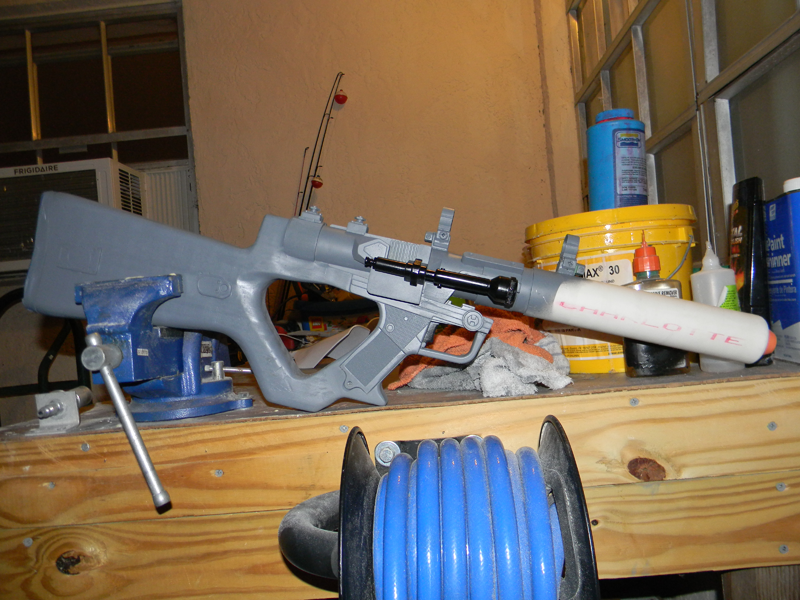 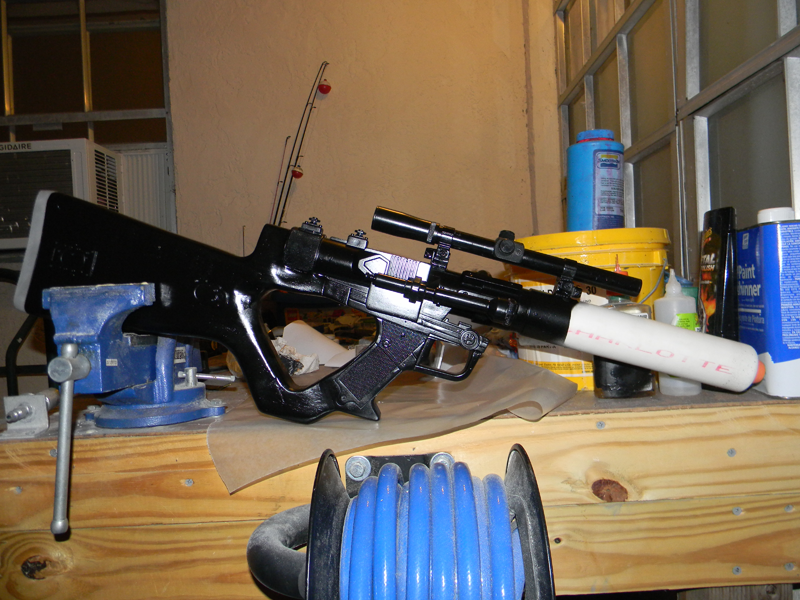 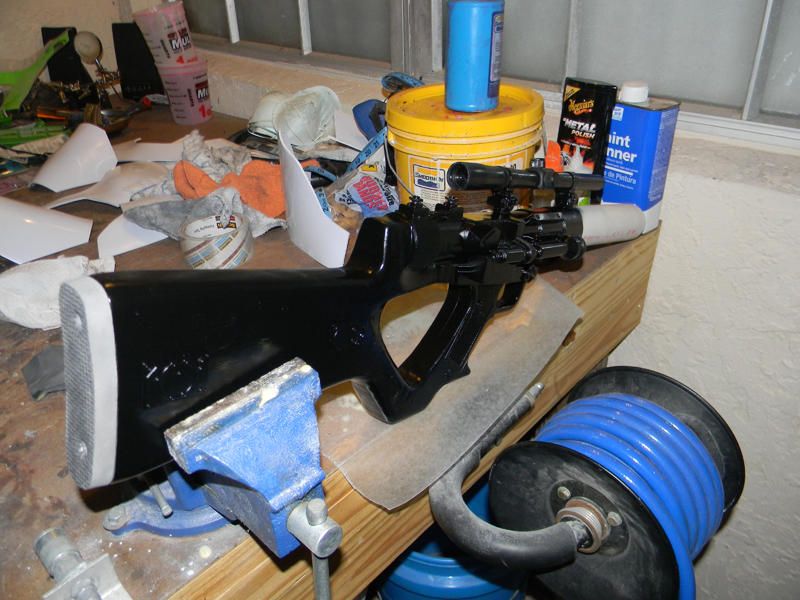 I also used the Hasbro Fett soundboard with a 2 1/2 speaker (it’s LOUD!) and changed the LED with a 4500 LED. So it’s fully functional. 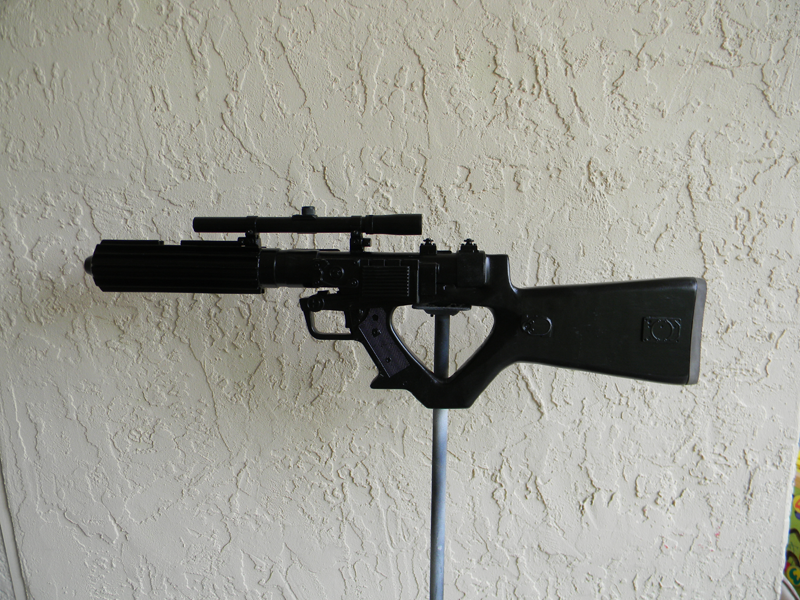 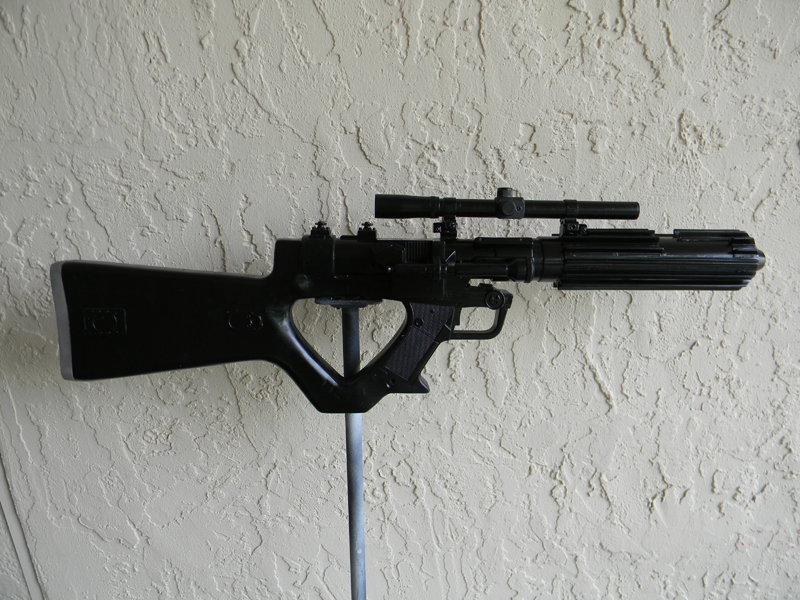 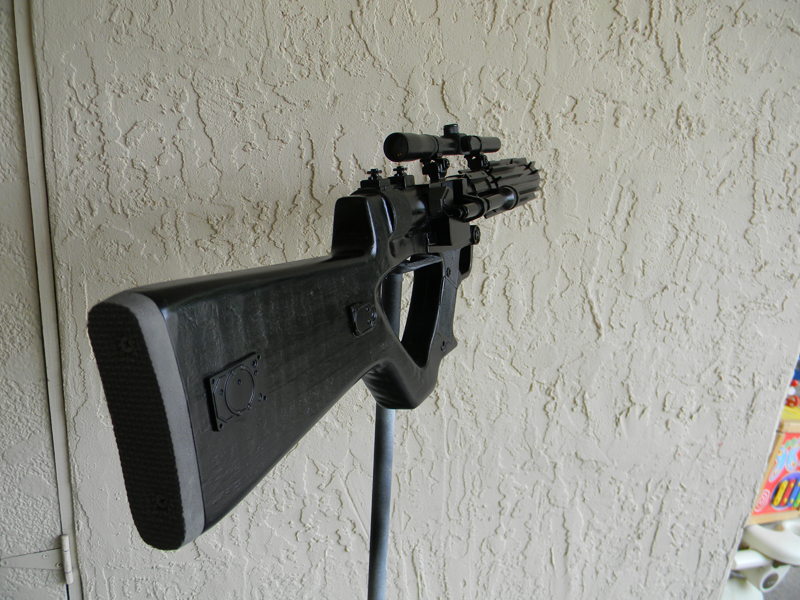 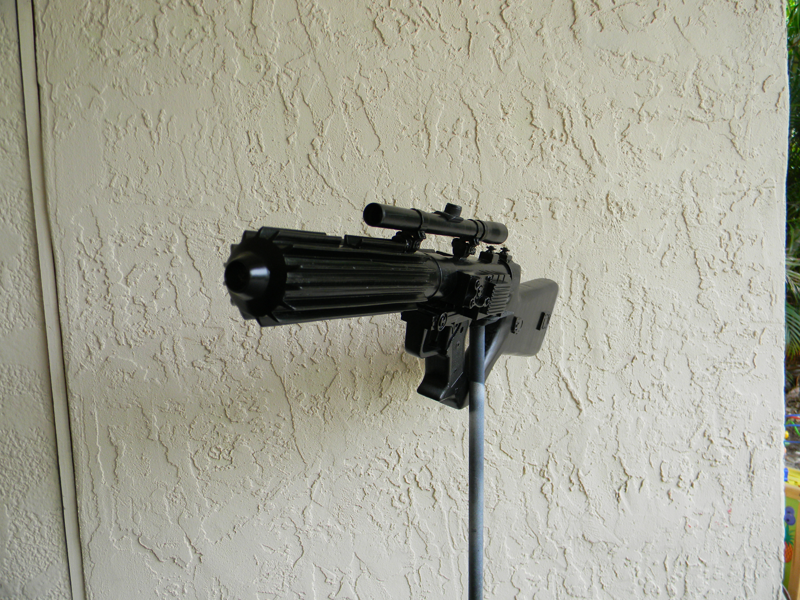 I also decided to make my own lightsabers to hang from my belt as “trophies”. Don’t cross a Mandalorian!! 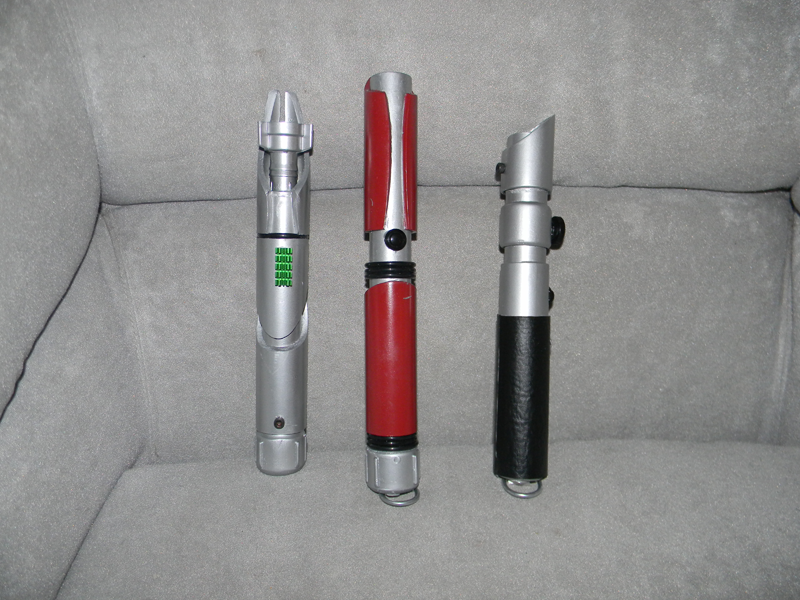 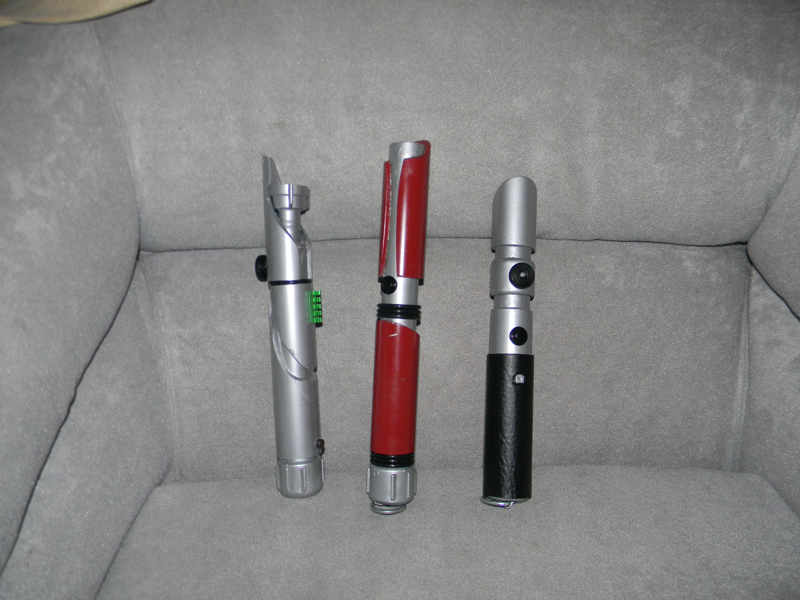 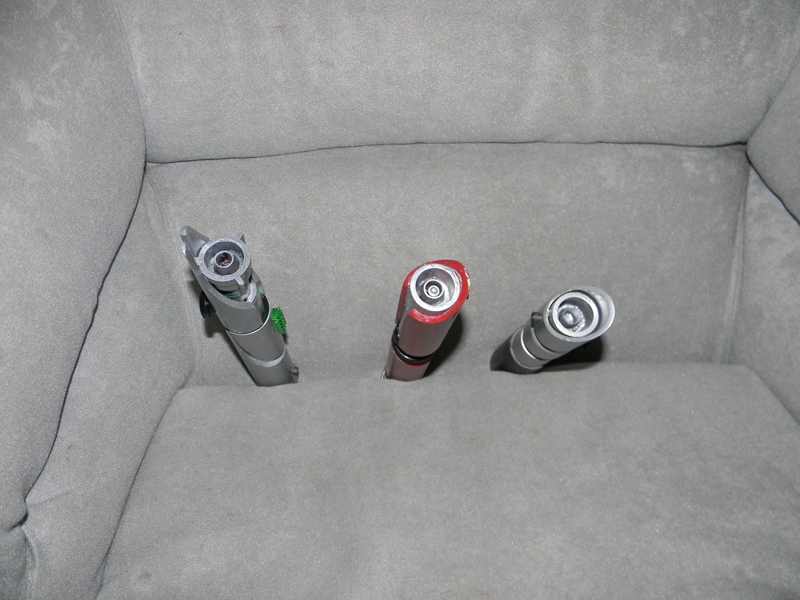 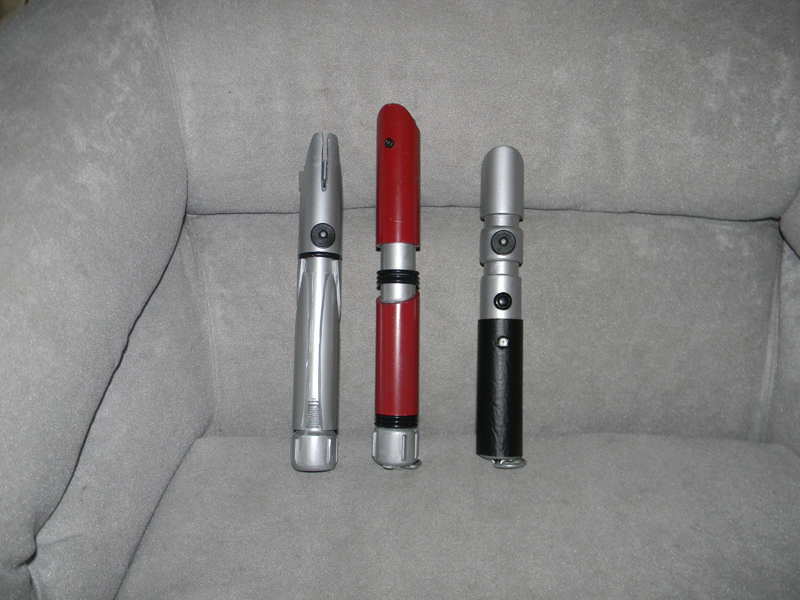